Instructions for adding an auxiliary line input to the Ford Taurus
Written by Alfred L. Poy

This modification replaces the tape deck signal with a line-in signal in your factory stereo system. This is a home-brew solution that will really only work for the Taurus and maybe a few other Ford models since the "head unit" in the dash doesn't contain the tuner or the amp. Both of those are in the trunk. Since the amp is in the trunk, there are a pair of wires that feed the tape deck signal from the head unit in the dash back to the amp in the trunk. The plan is to tap into those wires and add a mini-jack plug for line input. This operation is not for the fainthearted since it will require splicing directly into the vehicle wiring in a way that was not originally intended. The upside is that it is very cheap and results in very good sound quality. The downside is that you will loose the use of your tape player.

(1) Cassette tape with music on it (not blank)

(1) Volt meter to check your work

1) Gather the parts. The most important thing to decide in advance is how you will make the connection between the vehicle wires and the extension cord. I suggest using the 1/8 inch stereo jack (RS cat no. 274-274) and tap-in connectors (RS cat no. 64-3052). Make sure the extension cord is long enough to go from behind the dash to wherever you want to place the iPod in the car. 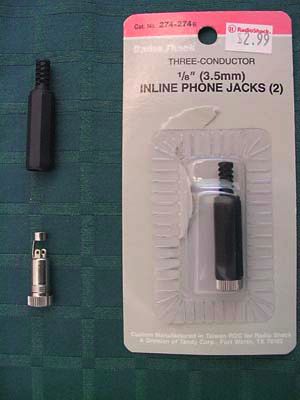 2) Prepare the jumper cable by soldering the 4 pieces of wire to the jack terminals. One wire to each of the left and right terminals, and two wires to the ground tab. Make sure the terminals can't touch each other when the shell is assembled.

3) Turn the radio volume to minimum and turn the radio off. Turn the vehicle ignition off. Disconnect the vehicle battery. Remove the radio from the dash using the DIN radio removal tools, or equivalent. Push the tools into the holes in the radio face plate. They should go in about 2.5-3 inches. Apply a slight outward spreading pressure and pull the radio out. 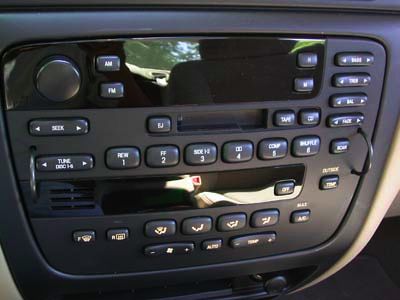 4) Disconnect all of the wiring harnesses from the radio and set it aside. Identify the radio connector that has the tape deck signal wires in it. 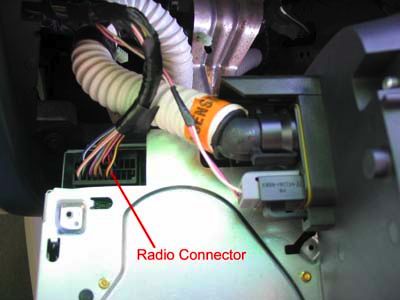 You can see the missing cassette audio signal wires on the right side of the radio connector (looking at it from the back) in the picture above. I have already removed the wires and connected them to the jumper cable (not shown).

5) Remove the individual vehicle wiring terminals for cassette R+, R-, L+, and L- from the connector. Do this by removing the red locking cover first. Then, by inserting an Xacto knife down the center of the connector, gently lift the terminal locking tab and pull the appropriate wire and terminal out the back of the connector. Note: This did not work for me. I ended up cutting off the wires about an inch from the connector. You may then use the blue tap-ins mentioned above, or any other method to connect the wires (butt end connectors, quick disconnects, solder, etc.). 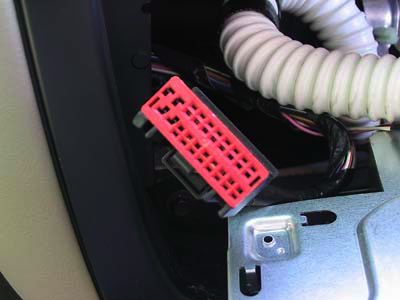 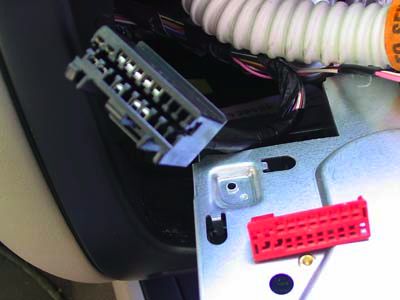 7) Plug one end of the stereo extension cord into the jumper cable jack. Plug the vehicle connectors back into the radio. Slide the radio half-way into the dash so that it supports itself but don’t lock it in.

Connect the vehicle battery. Turn the vehicle ignition to the accessory position (counterclockwise) to run the radio. The clock should display. Turn the radio on. Start at low volume and slowly increase. Verify that everything sounds normal. You should not hear any popping, hum or other strange noises. Verify that you can hear sound from all the speakers. (If you hear anything strange, turn off the radio and ignition immediately. Disconnect the wire harnesses and check your work.)

Next, plug the other end of the extension cord into the portable CD player headphone jack (or your iPod headphone jack if you trust your work). Turn the volume of the CD player/iPod to minimum. Place a cassette tape (with music on it, not blank) into the tape player. The head unit will switch from radio to tape mode. You should hear absolutely nothing. You should be able to turn the radio volume all the way up without hearing any hiss, hum, or static. If you hear anything, turn everything off and check your work.

Now for the moment you’ve been waiting for. With the head unit volume set at a low-moderate level, start the CD player (or iPod) and slowly turn up the volume on the player. You should start to hear music through your car’s speakers. You may have to turn the player’s volume up all the way to make it sound loud enough. If everything sounds normal, congratulations!

You can now hook up your iPod and give it a try. Use your iPod’s line-out if it has that feature. Otherwise, use the headphone output. You will probably have to turn the iPod’s volume to maximum if you use the headphone jack. Sit back and listen to the music for a moment. It should sound just as good as the vehicle’s CD player. Try gently wiggling some of the wiring connections to make sure there are no loose connections. If there are, you will hear static or popping. Play a song that will let you confirm that the left and right channels are playing in the correct speakers.

Once your satisfied that it works, turn everything off. Unplug the iPod.

8) Pull the radio back out. Wrap electrical tape around the tap-in connectors to prevent them from shorting on anything. Wrap any exposed wires with electrical tape to make sure they don’t rub and short out. Wrap electrical tape around the jumper cable and extension cord to make sure they don’t come apart. Route the extension wire to a convenient place in the vehicle. I routed mine through the center console so its completely hidden in the arm rest. Make sure you have enough slack at the back of the radio so it will slide in and out easily. 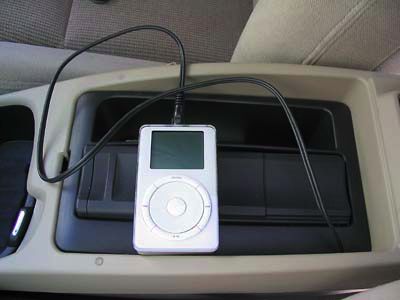 9) Reconnect all the connectors to the back of the radio. Remove the DIN tools from the radio. Gently slide the radio back in place until it locks. Be careful not to pinch any of the wires in the process.

Thanks to Alfred for a detailed write up.